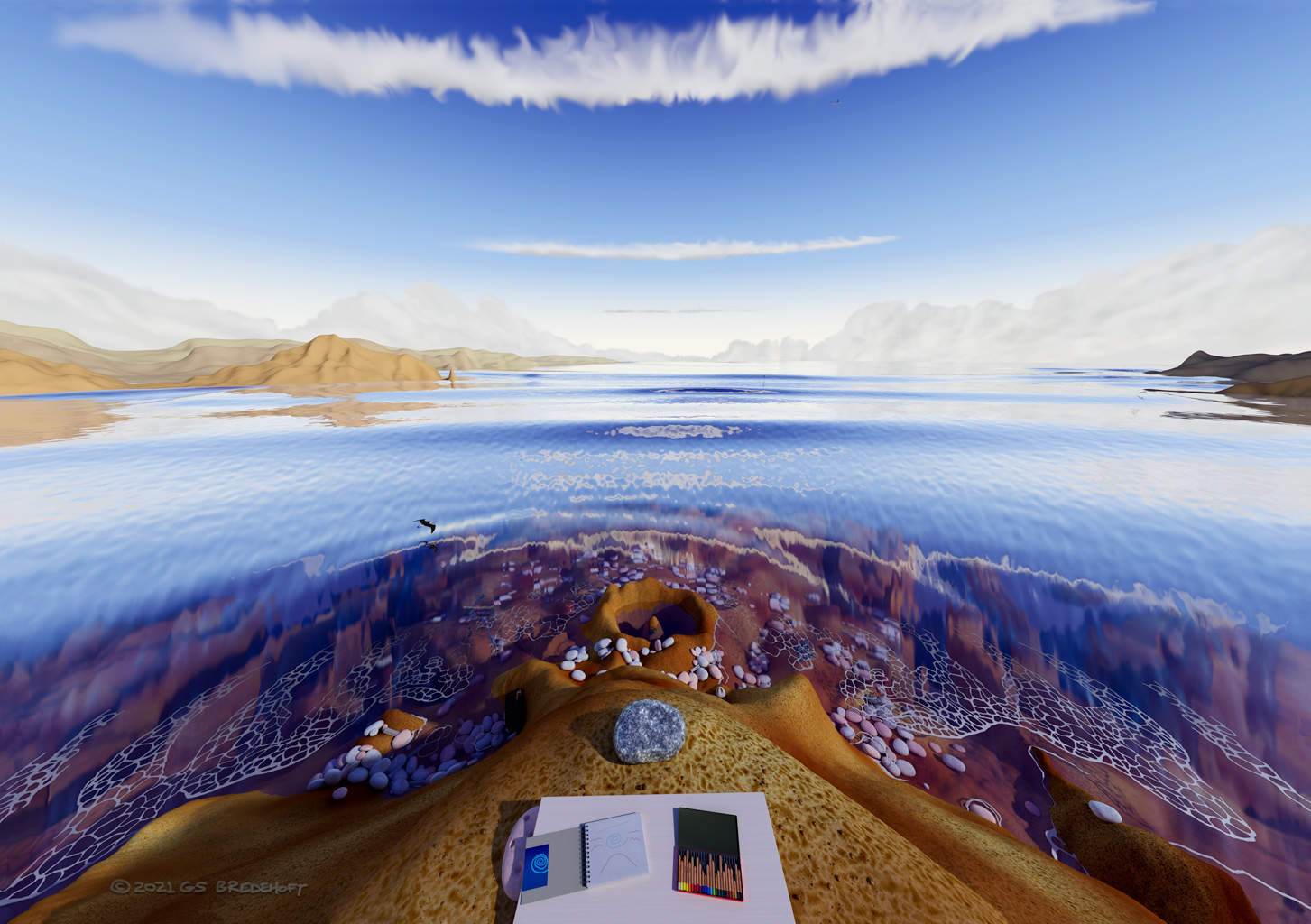 In the spirit of appreciation for everything that's been posted to this forum which has been helpful to me over the years… I offer some information about creating this painting in hopes that it might be helpful to someone.

The C3D scene created for this painting has also been used for many different paintings. E.g the scene was also used for Logical Conclusion < https://www.cheetah3d.com/forum/index.php?threads/14022/ >. It was also used for the quick and dirty render for the Windmill with a painted HDRI Background thread.

As one can see in the Scene info dialog, it contains quite a few objects and polygons.

Most of the 23 cameras are for specific paintings and those usually have a backup in case I accidentally, but instinctively, move the camera with mouse/keyboard combinations. Other cameras are random modeling/placement cameras located in various areas of interest around the scene.

The only part of this image that is NOT a textured model is the sky.

Most of the objects in the scene are models that were created in other C3D files. The exceptions are the landmass models and the ocean surface models which were created in the master scene file. Most files are a collection of objects that are logically modeled as a group, while some of the more complicated models are in their own files. UVs and textures were created/modified/tested/adjusted in this more-interactive setting. When objects/models are to be used in a scene, they are copied and pasted into it. Most scenes are simple enough, especially early in their development, that they remain fairly responsive to moving things around. This scene, however, has become a favorite and is now close to 500MB on disk. Moving anything around has become rather unresponsive.

When a scene gets this complicated, and I need to move things around, I will copy a selection of relevant parts out and create a new C3D file with that subset of models. After making the arrangement changes/additions I want, I'll paste those pieces back into the master scene.

It is quite likely that I could use Smart Folders, but so far I have not really played with them enough to feel comfortable. When I have some extra time to try them again, perhaps I'll start using them regularly.

The primary landmasses are five different models. Each started out as a flat plane which was made editable and trimmed to the desired 2D-top-view shape. From there they were formed using Subdivision, Displacement, a second Subdivision, and Smooth modifiers. There is a unique displacement map for each of the landmasses. Each map is a rather large layered Photoshop file.

The Hill (on top of which is the viewpoint/camera of this painting) after the modifiers got it to the basic shape, was made fully editable in order to fine tune/hand tweak the topography. After tweaking, the Hill holds another Subdivision modifier. The polygon count before the modifier is about 700,000. With the modifier it is about 3.8 million. As an example of the other landmasses' poly count, the closest landmass visible across the water is roughly 1500 polygons before modifiers and 1.4 million with modifiers.

Four of the landmasses form roughly-concentric rings around the Hill.

The ocean surface was created using a parametric disk with a radius of 32000 units, 64 corners, and 64 radius sections with modifiers: Subdivision, Displacement, Crumple, and Smooth. The Displacement uses a rather large layered Photoshop file. Since we don't have volumetric rendering with C3D, there is nothing to be gained by creating anything other than the surface.

Over the years I have settled on one unit being equal to one inch in my models. If I thought more fluidly in metric, then I might do something metric, but I still think in inches. If I didn't typically include small objects in landscapes, then I might use a different scale. I find it far simpler to make something 7.25" long rather than 0.201 yards, 0.184 meters, or 0.604 feet.

With that in mind, and for what it's worth, that scale makes the ocean surface a little more than one mile in diameter. On earth, when viewing at sea level, the horizon over the ocean is not quite 3 miles away. In this scene, it is only a little more than a half mile away. To address this shortfall, I paint my skies with the horizion below mid latitude of the spherical HDRI.

The camera used for this painting has a view angle of 107° and the renderer is Falcon.

Please let me know if there are any questions.

Thanks and cheers,
gsb
G